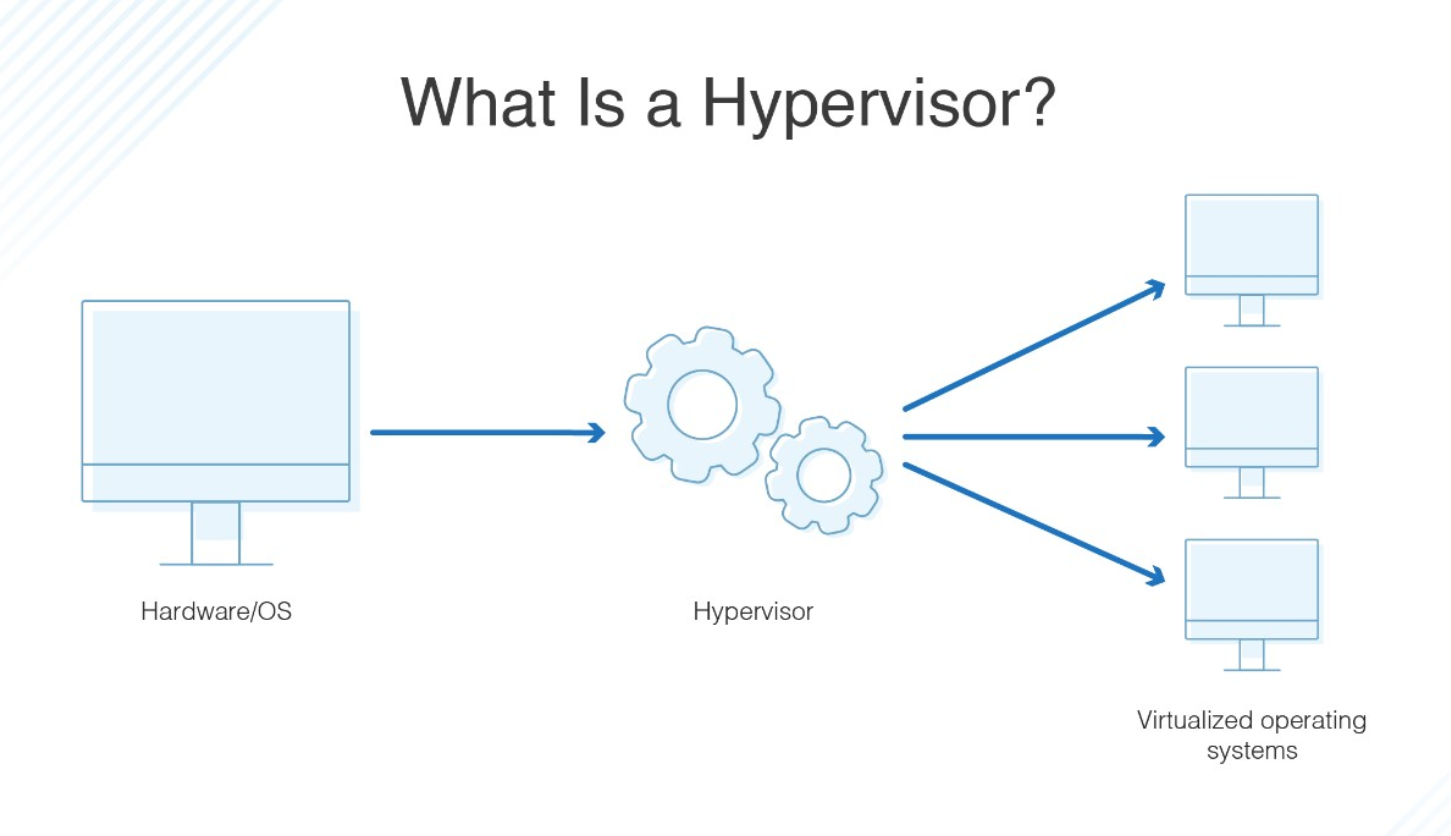 A hypervisor, also known as a virtual machine monitor or VMM, is software that creates and runs virtual machines (VMs). A hypervisor allows one host computer to support multiple guest VMs by virtually sharing its resources, such as memory and processing.

There are several benefits to using a hypervisor that hosts multiple virtual machines:

Speed: Hypervisors allow virtual machines to be created instantly, unlike bare-metal servers. This makes it easier to provision resources as needed for dynamic workloads.

Flexibility: Bare-metal hypervisors allow operating systems and their associated applications to run on a variety of hardware types because the hypervisor separates the OS from the underlying hardware, so the software no longer relies on specific hardware devices or drivers.

Portability: Hypervisors allow multiple operating systems to reside on the same physical server (host machine). Because the virtual machines that the hypervisor runs are independent from the physical machine, they are portable. IT teams can shift workloads and allocate networking, memory, storage and processing resources across multiple servers as needed, moving from machine to machine or platform to platform. When an application needs more processing power, the virtualization software allows it to seamlessly access additional machines.

Why use a hypervisor?

Hypervisors make it possible to use more of a system’s available resources and provide greater IT mobility since the guest VMs are independent of the host hardware. This means they can be easily moved between different servers. Because multiple virtual machines can run off of one physical server with a hypervisor, a hypervisor reduces:

There are two main hypervisor types, referred to as “Type 1” (or “bare metal”) and “Type 2” (or “hosted”). A type 1 hypervisor acts like a lightweight operating system and runs directly on the host’s hardware, while a type 2 hypervisor runs as a software layer on an operating system, like other computer programs.

Hardware acceleration technology can create and manage virtual resources faster by boosting processing speed for both bare-metal and hosted hypervisors. A type of hardware accelerator known as a virtual Dedicated Graphics Accelerator (vDGA) takes care of sending and refreshing high-end 3-D graphics. This frees up the main system for other tasks and greatly increases the display speed of images. For industries such as oil and gas exploration, where there is a need to quickly visualize complex data, this technology can be very useful.

Both types of hypervisors can run multiple virtual servers for multiple tenants on one physical machine. Public cloud service providers lease server space on the different virtual servers to different companies. One server might host several virtual servers that are all running workloads for different companies. This type of resource sharing can result in a “noisy neighbor” effect, when one of the tenants runs a large workload that interferes with the server performance for other tenants. It also poses more of a security risk than using a dedicated bare-metal server.

What is a cloud hypervisor?

As cloud computing becomes pervasive, the hypervisor has emerged as an invaluable tool for running virtual machines and driving innovation in a cloud environment. Since a hypervisor is a software layer that enables one host computer to simultaneously support multiple VMs, hypervisors are a key element of the technology that makes cloud computing possible. Hypervisors make cloud-based applications available to users across a virtual environment while still enabling IT to maintain control over a cloud environment’s infrastructure, applications and sensitive data.

Digital transformation and rising customer expectations are driving greater reliance on innovative applications. In response, many enterprises are migrating their virtual machines to the cloud. However, having to rewrite every existing application for the cloud can consume precious IT resources and lead to infrastructure silos. Fortunately, as an integral part of a virtualization platform, a hypervisor can help migrate applications to the cloud quickly. As a result, enterprises can reap the cloud’s many benefits, including reduced hardware expenditures, increased accessibility and greater scalability, for a faster return on investment.

How does a hypervisor work?

Hypervisors support the creation and management of virtual machines (VMs) by abstracting a computer’s software from its hardware. Hypervisors make virtualization possible by translating requests between the physical and virtual resources. Bare-metal hypervisors are sometimes embedded into the firmware at the same level as the motherboard basic input/output system (BIOS) to enable the operating system on a computer to access and use virtualization software.

Containers and hypervisors are both involved in making applications faster and more efficient, but they achieve this in different ways.

Allow an operating system to run independently from the underlying hardware through the use of virtual machines.

Allow applications to run independently of an operating system.

Can run on any operating system—all they need is a container engine to run.

Are extremely portable since in a container, an application has everything it needs to run.

Hypervisors and containers are used for different purposes. Hypervisors are used to create and run virtual machines (VMs), which each have their own complete operating systems, securely isolated from the others. In contrast to VMs, containers package up just an app and its related services. This makes them more lightweight and portable than VMs, so they are often used for fast and flexible application development and movement.